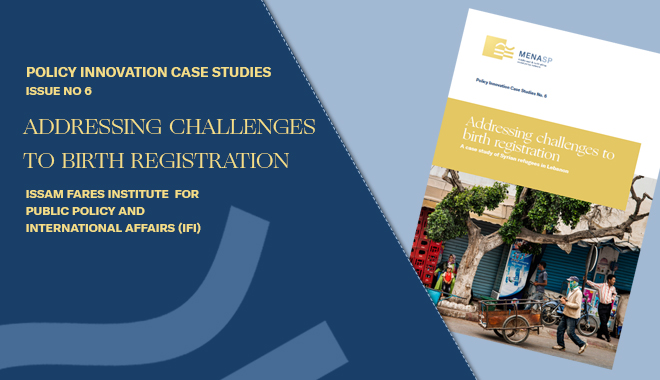 For this issue of the MENASP’s Policy Innovation Case Studies series, Issam Fares Institute for Public Policy and International Affairs (IFI) presents us with the challenges the Syrian refugees in Lebanon face to register new births and how the current policies in Lebanon are inefficient in tackling such issues.

Since the onset of the crisis in Syria in 2011, Lebanon has received over 1.5 million Syrian refugees. With the Lebanese government lacking a clear national policy towards refugees, the latter was left facing challenges on many levels, including birth registration. The lack of basic birth documentation would potentially put thousands of children at the risk of becoming stateless. Furthermore, in 2015, the Lebanese government asked the United Nations High Commissioner for Refugees (UNHCR) to suspend registering new refugees, making it more difficult for them to obtain formal documentation necessary for the birth registration process. This became a major humanitarian concern that could potentially increase the numbers of unregistered births. In 2016, striving to address this phenomenon, Issam Fares Institute for Public Policy and International Affairs (IFI), at the American University of Beirut (AUB), used data from the Norwegian Refugee Council (NRC) to produce an infographic on the challenges of birth registration faced by Syrian refugees in Lebanon. Building on this effort, IFI initiated a series of closed dialogue sessions with relevant stakeholders and experts to identify the main obstacles faced by Syrians in birth registration. The outcome of these discussions were recommendations made to the Ministry of Interior and Municipalities (MoIM), which in turn endorsed and implemented these through circulating internal memorandums that eased the bureaucratic procedures impeding birth registration.

More about the author

Launched by the Issam Fares Institute for Public Policy and International Affairs (IFI), the Refugee Research and Policy in the Arab World Program aims to collect, support and initiate research relevant to refugees – whether Syrian, Palestinian, Iraqi or others. It seeks to harness the refugee-related, policy-oriented research of the American University in Beirut’s (AUB) internationally respected faculty in order to achieve several goals: to enhance the Arab world’s input into regional and global refugee issues, to raise the quality of refugee-related debate and decision-making in the region, and to enrich the quality of interaction among scholars, officials, international organisations and civil society actors in the Middle East and abroad. By organising research studies, lectures, roundtable discussions, workshops, and conferences, this program hopes to bring together scholars and decision-makers to discuss salient issues that fall under the spectrum of refugee studies.