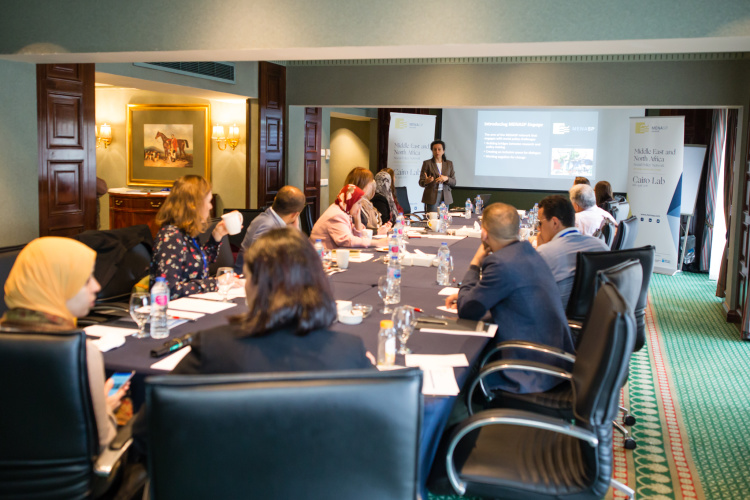 When the Middle East and North Africa Social Policy Network (MENASP) (convened by Dr. Rana Jawad) received funding from the Carnegie Corporation in New York to engage with policymakers in the Middle East, “Policy Labs” were among the deliverables. When I took the job as the post-doctoral researcher on the Carnegie Project, I had no idea what a “Policy Lab” was, let alone how to run one in the Middle East. After speaking with our partner, the British Council office in Cairo, it soon became clear that Rana and I were going to be the driving force behind the design of the “Policy labs”. In spite of my bemused and rather ignorant state, we had to seize the moment.  This was an opportunity not to be missed.

First, we had to figure out what a Policy Lab was and how it was understood in the context of policymaking in Western democracies. Then, we had to apply some version of these innovation ideas and values to the policymaking context of the Middle East, and Egypt in particular. We started by doing what any self-respecting academics would do, a literature review. We read and analyzed sources that described applications of design thinking to policymaking processes in the UK, Europe, and beyond. What we gathered was a set of principals having to do with opening up the policymaking process to user feedback, promoting innovations, encouraging new problem-solving techniques, and using evidence to choose interventions. From these values, we drafted a preliminary set of exercises and discussion questions to engage Lab participants.

That done, the more difficult second task of applying the principals began. The Egyptian political context is not exactly a model of democratic openness at the moment, even by regional standards. With President Sisi set to continue heavy-handed governance strategies into the near future (For more information about the successful referenda see this following news article), well-respected academic organizations such as the Middle East Studies Association (MESA) have recently issued statement of concern for academic freedom in Egypt. (To see the statement issued by MESA read mesana.org)  Not only were we concerned about the openness of local stakeholders to the ideas behind Policy Labs, we were also concerned about imposing Western structures on our Egyptian colleagues in an inappropriate and unhelpful manner. Rana and I knew from our diverse experiences with policymakers in the region that policymaking processes surrounding social policy are often opaque, sensitive to domestic power dynamics, and driven by desires to please donors more than build an equitable society.  Would the idea of a Policy Lab have any traction in this context?

If there were challenges, there were also opportunities. These came primarily in the form of timely topics and well-positioned partners. With regard to topic, Egypt’s recent acceptance of the IMF’s structural adjustment package means that welfare retrenchment and related reforms to subsidies and social assistance programs are prominent on the policy agenda. As such, researchers from across various institutions and backgrounds around Egypt shared our concern about the implications of these reforms for poverty and well-being. In particular, Chahir Zaki, of Cairo University championed the Egypt Policy Lab and its ideals among local stakeholders, and he continues to be a key partner in this unfolding saga, working alongside the British Council office in Cairo.

After many Skype calls and discussions with what has now grown into a Cairo Policy Lab team (rather than only Rana and myself), we decided to invest our efforts in a series of three one-day roundtable meetings between policy stakeholders, leading up to a larger event featuring international delegates and discussion topics. The purpose of the preliminary roundtables is to build trust between participants at a time of uncertainty and potential frustration for researchers and civil society activists.

Our team led the first roundtable event in Cairo on 14 April 2019. The event was well attended by researchers, NGO representatives, and civil society activists from a diverse set of institutions and backgrounds. The event focused on the individual-level impact of the cash transfer programs, known as Takaful and Karma, on multidimensional measures of well-being. The discussion was fruitful and attendees were full of good will. Importantly, they were receptive to the concept of Policy Labs and willing to participate in group exercises related to innovation and evidence-based policymaking. In fact, the event ran over time, as attendees were eager to continue the discussion and engage with each other and with the Policy Lab team. More information about the April event is available on the MENASP network website at https://www.menasp.com/cairo-policy-lab/.

While the April event provided much needed affirmation about the concept of the Cairo Policy Lab and its applicability to the Egyptian context, there are challenges ahead. The next roundtable event planned for late June addresses the potentially more divisive theme of subsidy reform and aspires to bring representatives from the Ministries of Finance and Social Solidarity to the table alongside civil society activists and researchers. Participants may have strongly opposing views that run counter to the inclusive and open aims of Policy Lab.  Thus, it is too early to assess the success of our application of design thinking to policymaking in the Egyptian context.  However, the first fruits of our efforts indicate genuine potential, which is cause for optimism given the seeming impossibility of the task only nine months ago.