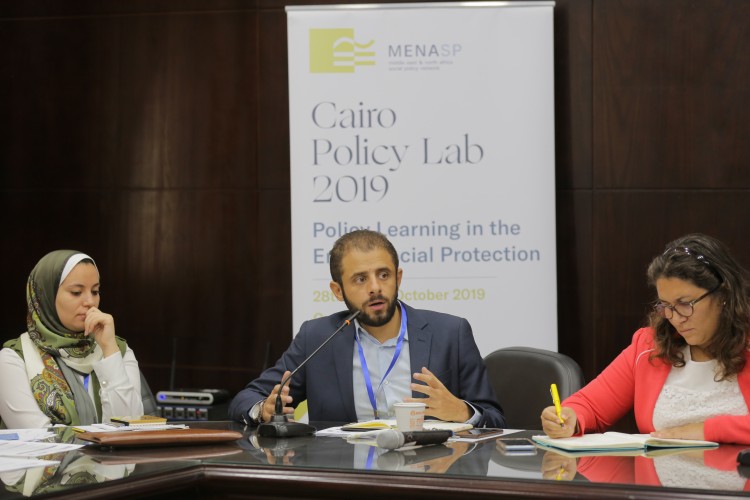 On 28 to 29 October 2019, the MENASP network, the Faculty of Economics and Political Science at Cairo University, the University of Bath and the British Council convened a ‘Policy Lab’ in Cairo. Policy Labs apply design thinking to policy making with a view to enhancing the policy making process. Design thinking is an iterative process which seeks to understand the user, challenge assumptions and redefine problems in order to identify strategies and solutions that may not be immediately apparent. This is important because humans naturally develop patterns of thinking which have the potential to prevent us from developing new ways of seeing, understanding and solving problems.

The Cairo Policy Lab brought a diversity of stakeholders together including: government representatives, for example, from the Ministry of Planning and the Ministry of Finance; representatives from international organisations such as the World Bank, the ILO and UNICEF; and independent scholars and researchers from both the MENA region and from further afield.

Convened under Chatham House rules, the first day of the Policy Lab provided a safe space within which policy makers and practitioners could debate some of the key social policy concerns of the day ranging from the virtues of targeted versus universal social protection schemes and the financing of social protection under conditions of austerity to the social and economic inclusion of persons with intellectual and developmental disabilities. The second day of the Policy Lab took a more practical turn. In groups of four to five, the participants were asked to tackle a range of practical dilemmas including by assessing the adequacy of the data available upon which to make key policy decisions. Grounded in Egypt’s commitments under the 2030 Sustainable Development Agenda, the participants were asked to:

Importantly – and drawing on design principles – the participants were asked to consider whether there was a need to reformulate the task or ‘problem’ they had been allocated before devising potential solutions, an approach deemed to be valuable by many of the participants.

While minor modifications to the Policy Lab programme were proposed by the participants, overall the feedback from the Policy Lab attendees was overwhelmingly positive. One attendee remarked in this regard that: “I totally agree that if this kind of structure, this model was used in the making of policy, we could eradicate some of the political influence and make policies that really work’ while another commented that: “I second [those sentiments], the fact that each team included different backgrounds, international donors, specialists, researchers; if we could do this at the decision making level it would be heaven on earth.”

In light of the positive feedback received from the participants, the MENASP network plans to convene additional Policy Labs in the MENA region over the coming year. The MENASP network and its partner organisations are very grateful to the Carnegie Corporation of New York for its generous financial support for this initiative.